Finally scored some of these locally on the last walk growing under Holly, so I made sure I had a positive ID using 3 separate books including Rodger Phillips Mushrooms, checked the gill type which were crowded and sinuate, and the colours, shape and size of the other parts.

Just to make sure I did a spore print which turned out to be rather impressive. Younger specimens were lilac coloured and the older larger ones were starting to become beige, so no rusty brown spores which could have made them Cortinarius fungi. 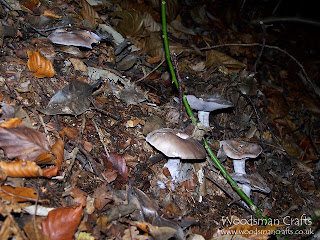 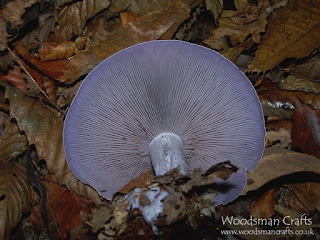 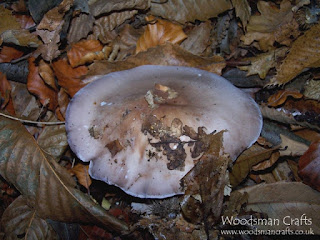 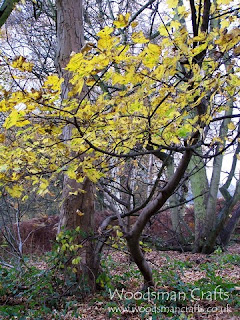 Last of the Autumn colour before the recent storms. 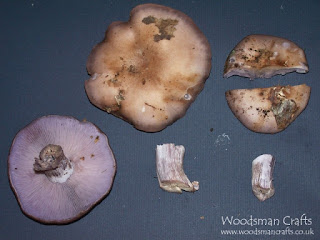 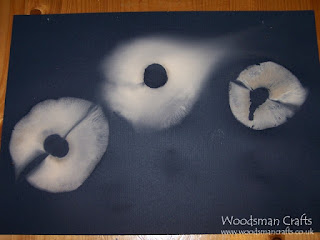 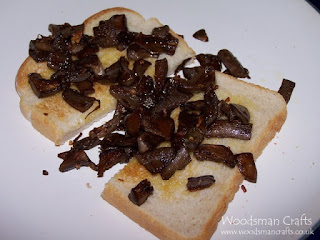 After all the hard work Identifying them, I thought it only proper to eat them.
They smelt and tasted gorgeous, simply sautéed in the pan with some Butter, Oil, garlic, salt, pepper and served on buttered toast. Yummy : )

John Wrights Book on Mushrooms in the River Cottage handbook series was great for additional information on ID, background information and recipes. Very funny too in places.

I've been practising fungal ID recently, some I'm much more familiar with such as tree decay fungal brackets, but less so with the rest. I always try to learn several more each year as I come across them.
Here are some pictures of a few I'm quite sure about, I wanted to be positive on at least one, particularly as I wanted to eat a new one, so I did some further work on the Wood Blewit, which I'll post about next time. 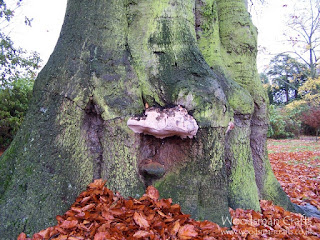 Ganoderma adspersum
Great for making Amadou. Forget about horses hoof fungus if you find this fellow. Much more trauma layer and easier to process. It goes up a treat. 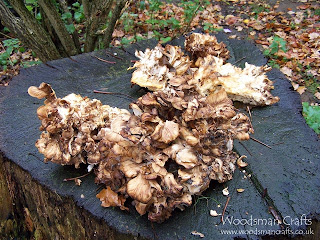 Grifola frondosa
This had been kicked off the buttress root sby a previous passer by. Its an Oak stump which this fungus likes. It's supposed to be a very popular and expensive herbal medicine. I often find this on other Oaks during my inspection work with trees. 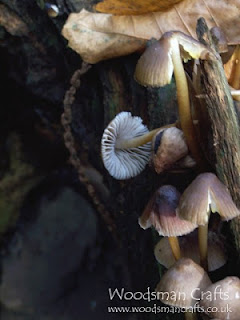 Mycena sps - Wax caps
Still unsure about the species on this one but i think its a common type associated with hardwood dead stumps. 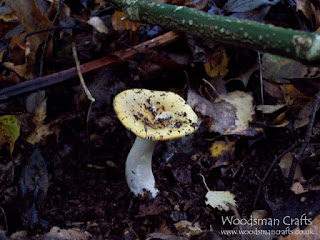 Russula ochroleuca - CommanYellow Brittlegill
I really like coming across these. The badgers and dogs normally knock them over in the local woods. There weren't many about this year but now I know where they are I'll be back next year when hopefully there will be a few more. 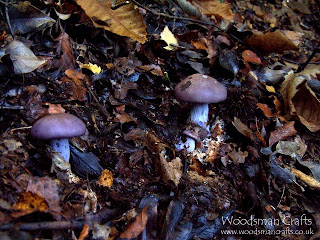 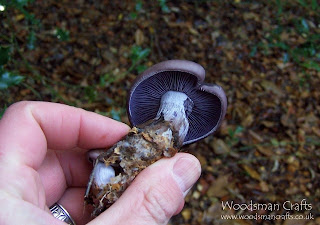 Lepista nuda -Wood Blewit
First time I've found these on my own and they love a secluded spot. They like to pop up later in the season and have done well since the first two frosts this year. They smell and look really nice. Looking forward to cooking some larger ones I found this week. 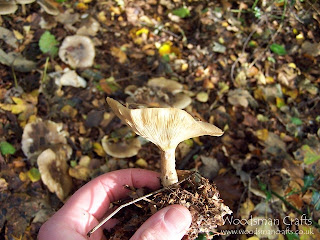 Clitocype nebularis - Clouded funnel
Not as many around this year and they really like the old railway embankments. Shame there not recommended for eating in most of the books.

Anyway, I hope that was of interest to folks. Feel free to comment, correct, or chat about your finds this year.

During another recent walk, I took along a camera and snapped away at some of the sights along the way. Some are from the phone so please excuse the quality. I got so carried away on one occasion that it started to drop dark, so I phoned home for a pass out, as it was the perfect time to settle down and watch the badgers come out to play. 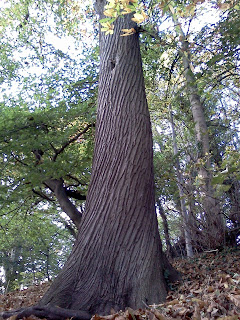 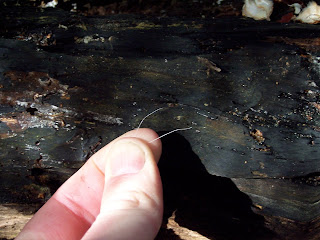 Badger Hair on one of many trails leading to several sets. 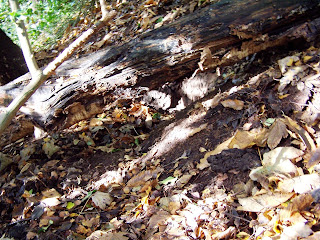 The log they duck under on the trail. The flattened newly fallen leaves are a give away to activity. 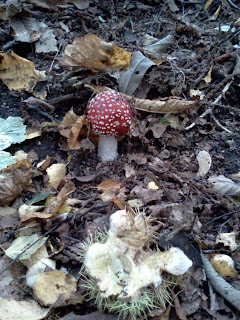 Young Fly Agaric. This was also on the badger trail, and when I revisited a week later to see how it was developing, it had been pushed over. There were several other interesting species of fungi which I will post on soon, now I'm close to the Identification of them. 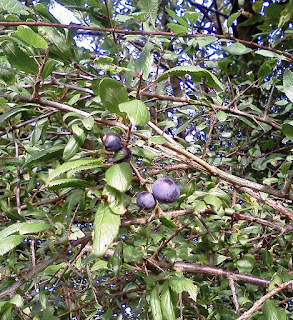 Just a few Sloes on the bushes, but plenty of Rose Hips and Hawthorn Berries. 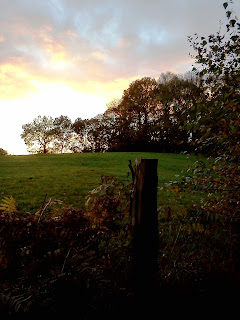 The Emerdale Farm shot. "Should I stay, or should I go" 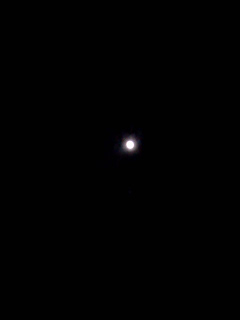 I stayed, and watched the badgers. There were 5 of them who snuffled about in the new leaf litter close to their set entrances for around 30 mins, then one by one in single file they emerged right in front of me as they went out on patrol into the rest of the wood.

The full  moon came up shortly after so I headed back home but just before I did, I heard a noise of approching footsteps. I stayed very still and quiet and they grew louder heading staright to the tree I was leaning against. As the badger (I hope!) reached the tree he must of had a wiff of woodsman and took off like a shot. Then a while later he did exactly the same again. Strange when you cant see them but probably more exciting. I love staying out like this and it was far more entertaining on a Saturday night than most things going off in the area.
Posted by Unknown at 13:25 No comments:

I recently took my daughter on a local foray with a guide around a nature reserve. There were far fewer mushrooms than other years, but after much searching the group managed a good haul, and we found some that I dont normally see.

The finds are used to monitor species on the site and for education. 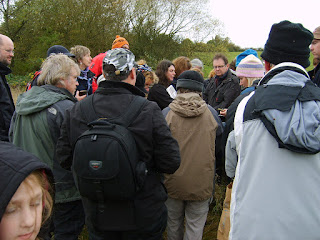 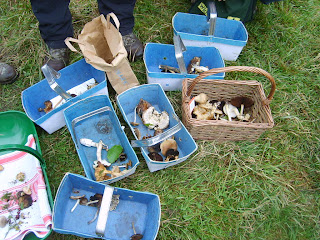 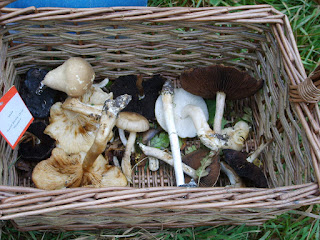 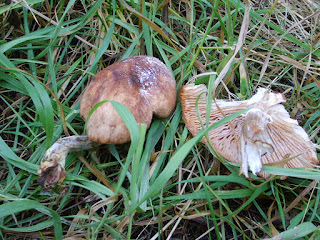 Honey fungus, these were left after ID, so that we didn't spread it back home. 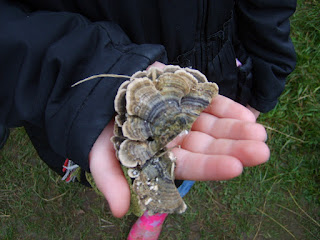 I've also been going out locally to find other species, and found some interesting ones in a very nice woodland, which I'll post about when I've sorted the Identification. There were various species, but not in profusion again this year.