How to make a Bundle Bow

I thought I would have a go at making a Bundle Bow today using three lengths of Hazel, bound together using strips of Elm inner bark. The Idea being that out of the primitive weapons, the bow and arrow seem the easiest for me to hit the target with on a fairly regular (albeit on an amateur level)  amount and with some degree of impact potential.

Making a bush bow from a sapling without an Axe would ruin the edge of a knife and be hard and time consuming work. A bundle bow however is a pleasant task, and achieves it would seem, a bow of similar performance.

I used one length measuring 6' long and around thumb thick, one at 4.5' and index finger thick and the smallest being 3' long and little finger thick, to see what the power would be like with only three poles and hoping it would be easier and quicker to make than lots.
I got the idea from a great site in the US called http://www.primitiveways.com

Cut to length the three hazel sticks and mark there centre points.
Lay the 6' and 4.5' together at the centre points and lash together in the middle, ends and halfway between middle and end. That's five equally spaced locations.

Then Lash on the 3' stick using five more lashing points in the same way but this time going around all three sticks. This two stage lashing, binds the sticks more thoroughly.

All done, and string made using 4 strands of inner para-cord, simply twisted together using a two ply cordage method.(One pair for each strand) Basic nocks just carved into the 6' stick ends.
Fixed loop made at one string end and then find the correct place for locking off with a few hitches on the other. The distance I used between the string and bow handle was One fist and thumb outstretched. 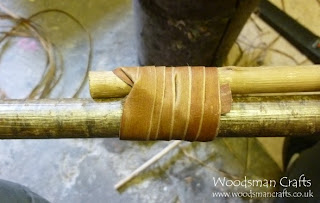 The whipping knot used on the Elm bark lashings.

Use the same knot to whip on two strands of inner para-cord for the short section that the arrow clips onto the string. Helps when drawing to keep it in place and with abrasion over time. 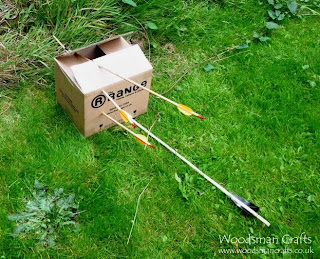 Then get on that range!

Mine is only pulling around 27lb but feels good and sturdy and might just do the job if hunting in a survival situation. The bow seems to be shooting consistently and "feels right" so far.
Just need to train the operator some more and make some more primitive arrows!

Fire by friction - On the day

Today was a visit to the woods to practice some skills and enjoy the season. I like this time of year as the heat of Summer gives way to a hint of Autumn.

I wanted to make fire by friction with the materials found in the wood, and on its boundary where there is more light and different plants (except the cord as that's for another post). Its good to get away from perfect conditions and test yourself, especially if teaching the subject.

I  needed to practice some more with hunting weapons so I had a go with throwing sticks, and as spoons have taken hold again, I made a spoon without axe or crooked knife. 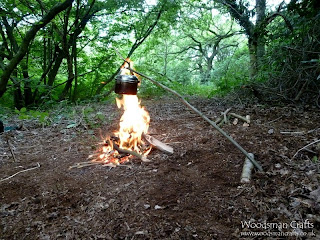 I've had an excellent day today teaching Axe and Knife use to Five great students, and we even managed some spoons. We went through all the usual safe working techniques, increasing the skill level throughout the day to progress to spoon making. They were a joy to teach and made some lovely cooking spoons which for first attempts were spot on. They all left eager to wait for them to dry and carry on the fine whittling. 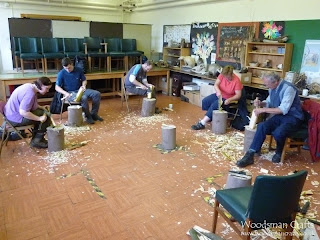 A cracking day, and looking forward to the next one.